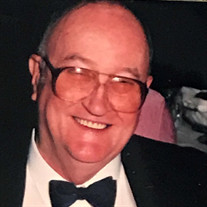 Walter Harle, 91, of Cedar Glen West in Manchester, passed away on Sunday, March 25, 2018. He was born in Newark in 1929, living with his parents (Howard and Louise Harle) and four brothers (Howard Jr., Herbert, Marvan and Lester) in Irvington and North Arlington, during his childhood, before moving to Nutley in 1943. Walter would remain in Nutley for 44 years living in homes on Vreeland, Alexander and Raymond Avenues, before retiring to Manchester. Both Walter and his older brother Howard Jr. were drafted into WWII while still in High School. Like many of his great generation, Walter rarely spoke of his time in service except to credit Howard and the many other brave young men who gave their lives to save the world from tyranny. Fortunately, the records show that Walter served his country with distinction in the 13th Armored Division of the 3rd Army during WWII. After being honorably discharged from the Army, he returned home to complete his High School studies and subsequently earned a Bachelor of Science degree in Industrial Engineering from Fairleigh Dickinson University. In addition to his studies he was proud to serve as Boy Scout Master for Nutley Troop 4-144 for 7 years following his return from military service. After completing his studies in 1951, he enjoyed a long career as a Telephone Power Equipment Engineer for AT&T before retiring in 1987. Walter was a devoted Christian. He served in the Church Vestry, Lay ministry and Choir for over 50 combined years at Grace Episcopal Church in Nutley and Christ Episcopal Church in Toms River. He was a member of the American Legion (Whiting), Telephone Pioneers of America, Moose Lodge (Seaside Chapter) and Cedar Glen West Choral Group. Walter was predeceased by his first wife Phyllis Harle (nee Mottram) and his second wife Catherine Harle, formerly Catherine Obst (nee Fitzgerald). He is survived by his sons and their spouses Richard and Helen of Dumont and William and Kathleen of Nutley, five grandchildren and a brother Marvan Harle of Cherry Hill, California. A memorial service will be held on Saturday, April 21st at 3PM, at Christ Episcopal Church, 415 Washington Street, Toms River. Condolences can be sent to: www.carmonabolenfh.com.

Walter Harle, 91, of Cedar Glen West in Manchester, passed away on Sunday, March 25, 2018. He was born in Newark in 1929, living with his parents (Howard and Louise Harle) and four brothers (Howard Jr., Herbert, Marvan and Lester) in Irvington... View Obituary & Service Information

The family of Walter Harle created this Life Tributes page to make it easy to share your memories.

Walter Harle, 91, of Cedar Glen West in Manchester, passed away...

Send flowers to the Harle family.