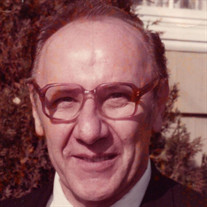 Toms River - Walter Krupna, a 35 year resident of the Baywood section of Brick and former long-time resident of Colonia, NJ, died Wednesday, April 7, 2021 at his daughter’s home surrounded and cared for by his loving family. Born in Poland, Walter immigrated to the United States from Germany following the liberation after World War II. As a teenager in war-torn Europe, Walter and his family relocated numerous times in their effort to flee Communism and Nazi invasions. He survived life in forced labor camps and ultimately displaced persons camps. He served informally alongside American forces in the Polish Army. His gratitude for the United States never waned and he always expressed his undying affection for the opportunities his receiving nation afforded him and his family. Walter worked as a tool and dye machinist with General Electric, Newark, NJ and later with Revlon, Edison, NJ from which he retired. Walter was the handiest of handymen any family could hope for and always was in search of the next project that involved fixing of any sort. His quiet demeanor and “man of few words” personality was respected by all who knew him. His work ethic was unmatched. Walter is predeceased by the love of his life, Helen (Sieradzka) Krupna to whom he was married for 66 years. He is survived by his adoring children, Walter, Jr. (Rhonda) of Morris Plains and Debi (Stephen) Mielach of Toms River. He is the always adored “Dziadziu” of Andrew (Danielle) Mielach, Stephanie (James) Corrigan and Michelle (Brent) Gaylord. Walter is also survived by three great-grandchildren, Brady, Toby and Lillian. Visitation will be Sunday 2:00 PM to 6:00 PM at Carmona-Bolen Home for Funerals, 412 Main Street, Toms River. A Funeral Mass will be offered Monday at 11:30 AM at St. Joseph RC Church, 685 Hooper Avenue, Toms River followed by entombment at Ocean County Memorial Park in Toms River. In lieu of flowers, contributions in Walter’s memory can be made to St. Joseph Grade School, 711 Hooper Avenue, Toms River, NJ. 08753.

Toms River - Walter Krupna, a 35 year resident of the Baywood section of Brick and former long-time resident of Colonia, NJ, died Wednesday, April 7, 2021 at his daughter&#8217;s home surrounded and cared for by his loving family. Born in Poland,... View Obituary & Service Information

The family of Walter Krupna created this Life Tributes page to make it easy to share your memories.

Toms River - Walter Krupna, a 35 year resident of the Baywood...

Send flowers to the Krupna family.