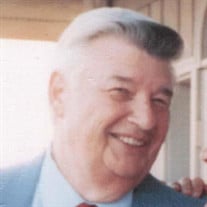 William Raymond Murphy Jr., 95, passed away on August 20, 2020 at his riverfront home in Toms River. His wife Joan of 66 years was at his side, as always. He was known as Bill. He was proud of his New Jersey roots and loved the water, fishing, boats, and Seaside where he spent his summers. He was born in Trenton on November 3, 1924, the son of William Raymond Murphy Sr. and Mabel Deignan. He was raised in Bordentown and graduated from Bordentown High School in 1942. He served in the Army and was stationed in San Francisco, his favorite place in the whole world. He traveled the world as an officer in the Merchant Marines on the USS Amiens. Upon returning from his service in the military, he attended the University of Pennsylvania. He was very active there as a fraternity brother and played college baseball. He graduated from the Wharton School of University of Pennsylvania. Bill had a forty year career with the State of New Jersey Treasury Department where he set up the retirement and pension plans for all of the state employees. He retired as the Assistant Director of Pensions. Bill lived a full life. When he was young, he loved hunting and had 3 hunting dogs named Brandy, Scotch, and Soda. He loved sports, especially Philadelphia sports teams. He was a dedicated fan of his favorite team, the Phillies. He loved crabbing and fishing with his children and grandchildren and was known for his baked stuffed bluefish. He loved to travel to New England to visit his children and to take everyone on family ski trips. He was very proud of his Irish heritage - always making sure there was a good band, top shelf drinks (particularly scotch) and mashed potatoes on every menu. He loved Frank Sinatra and Big Band music. He became the family shopper and cook once surprise Baby Hughie was on the way - known for breakfasts of scrambled eggs and truck driver sandwiches with pork roll. He was known for his dinners with fiery steaks and eggplant parm on the hottest days of the summer. Bill and Joan settled in Toms River and raised 5 children. They were inseparable, spontaneous, and active. One highlight was a trip to Ireland for their 25th anniversary with special friends and a visit with the Pope. Most of all, Bill loved his family and was a selfless man doing everything for all of them always. He was a proud supporter of his children's and grandchildren's activities and interests throughout the years. He coached little league baseball and was involved in the Beachwood Yacht Club. He served as President of Angels Pop Warner and went on to serve on the PTA Board and became President of the Monsignor Donovan Booster Club. He was a man of strong faith and a parishioner of St. Joseph's in Toms River for over 50 years. His early retirement was spent traveling to attend football games for Johns Hopkins while his youngest son Hugh played there. He loved his time living on the river watching the boats, especially the wooden boat festival each year. Bill leaves his wife Joan and his five children; William R. Murphy III, also known as Trip, of Toms River, NJ; Erin Murphy (and Anita) of Yakima, Washington; Sean Murphy (and Karen) of Marblehead, Massachusetts; Megin Ward (and Dick) of South Paris, Maine; Hugh Murphy (and Meghan) of Randolph, NJ. He also leaves 7 grandchildren who lovingly called him Pop Pop; Caroline, Trevor, Jen, Connor, Michaela, Grace, and Jack. He is also survived by his sister-in-laws Rosemarie and Milena, and many nieces and nephews. He is predeceased by his parents, his sister Veronica, and his infant daughter Kerry. Funeral Services will be under the direction of Carmona-Bolen in Toms River, NJ. Family and friends are respectfully invited to attend appropriately social distanced visiting hours on Thursday, August 27th from 4:00-8:00 PM and a Funeral Mass on Friday, August 28th at 10:30 AM at St. Joseph’s Roman Catholic Church in Toms River, NJ. Burial will be immediately following at BG William C. Doyle Veterans Memorial Cemetery in Arneytown, NJ. The Repass Celebration will follow after the cemetery burial.

William Raymond Murphy Jr., 95, passed away on August 20, 2020 at his riverfront home in Toms River. His wife Joan of 66 years was at his side, as always. He was known as Bill. He was proud of his New Jersey roots and loved the water, fishing,... View Obituary & Service Information

The family of William Raymond Murphy Jr. created this Life Tributes page to make it easy to share your memories.

Send flowers to the Murphy family.